Jenny Shearer was working as a preschool teacher at Little Earth Montessori, on the Kāpiti Coast, when a dream took hold of her. She began by writing one song, Ko te Ngahere, for her students to sing as they went on their forest walks. They enjoyed this waiata and would sing it to themselves at preschool, at home, and would often request it as a favourite. 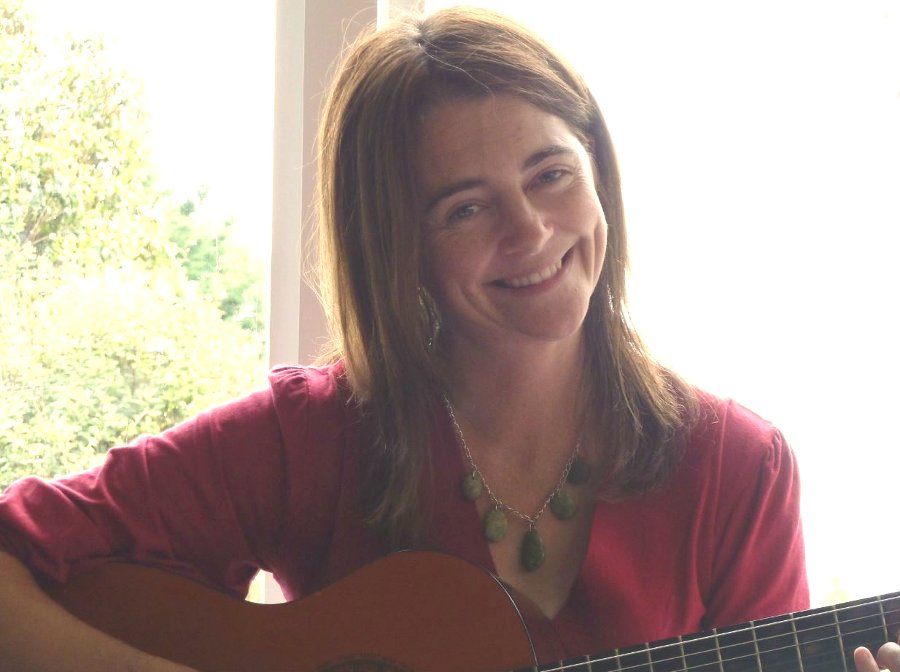 Affected by illness, Jenny left her job in mid 2014, and sharpened her focus on what was most important to her. With the encouragement of her family, and close colleagues, including composer and singer Matiu te Huki -who would regularly visit Little Earth to teach waiata - her priorities became clear. Jenny wrote: “I want to have a collection of songs that I’ve written, about real places, or things in New Zealand, or based on Māori legends that I can take into early childhood centres and kindergartens...”

She worked diligently on writing waiata. Some of these were inspired by her family’s earlier three month campervan trip around the Coromandel and Northland. With the help of Matiu, who assisted with translation and tikanga (Māori customs / worldview), she composed a further seven waiata and developed ideas and concepts for two others. She took up guitar, songwriting and singing lessons to develop her discovered talents.

“What lies behind my dream is a passion I’ve had since studying a biculturalism paper at University. It’s a passion for all children in New Zealand to grow up experiencing Māori culture as something they can feel comfortable within, enjoy, participate in, and feel confident operating within.” (Jenny, 2014)

Jenny’s dream was consistent with the goals of Te Whāriki (NZ early childhood curriculum) which states “In early childhood education settings, all children should be given the opportunity to develop knowledge and an understanding of the cultural heritages of both partners to Te Tiriti o Waitangi.” (Te Whāriki, 1996).

Sadly, Jenny did not survive her illness, and she did not see the completion of her dream. It was inconceivable to Jenny’s husband, Grant, and their sons, Malachi, Jamaya and Neo, that these songs would remain in her song folder on their coffee table. Family and friends rallied to raise funds to record the songs. With the guidance of a friend, Dion Howard, this fund grew into a PledgeMe campaign, with a view to producing and distributing a few hundred resources around the Wellington region. A collaboration with Massey University College of Creative Arts, and Lee Prebble, and the other guests artists, the resources developed a professional and creative style that Jenny would never have imagined was possible.

The motifs in Jenny’s songs, of flying birds, and other kaitiaki, have persisted throughout the production of Te Kōtare. After the Pledgeme campaign quickly hit it’s target, the songs came to the attention of the Ministry of Education, and NZ on Air. Throughout this project, there has been an enduring sense of guidance and care, as if, all along, they were destined to be shared and utilised in classrooms and homes throughout New Zealand. That Jenny’s vision should have flown this far, is beyond her wildest dreams. Anyone who knows Jenny, knows that she would never want to be the centre of the story.

Yet, we are tremendously grateful that she has left us with these waiata. As they fly throughout New Zealand/Aotearoa and take on lives of their own, Jenny’s deepest hope was simply that they would join the efforts of so many others working to assist people in their journey of learning te reo Māori. We hope that you will take as much joy and pleasure in them as we do.

Since late 2014, Te Kōtare (The Kingfisher bird) became a symbol for Jenny of embracing the new and listening to and following her heart. Having read the book ‘Wisdom of the four Winds’ by Barry Brailsford the symbolism behind Kōtare spoke strongly to her.
Describing ‘The gifts’ of the Kōtare, Brailsford (1999) says “Go into the stillness, the silent place within and listen to the voice of the wise one who waits to guide you. Decide what is now important in your life. Draw a new map for the journey that unfolds and prepare to walk it”.
For Jenny a big part of this was attending to something that had been important to her for her whole life, which was promoting the values of biculturalism. She soon discovered that the combination of her music talent with her early childhood background was the vehicle to express her beliefs.

For those who are open to the mysterious, the seldom seen Kōtare began to appear regularly to her, which urged her on in following her dream. Interestingly, Kōtare also appeared to other family members both locally and around the country. Some of these sightings and encounters were truly out of the ordinary.